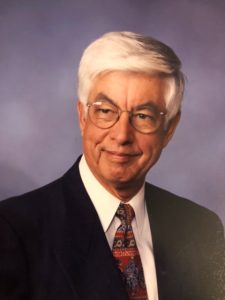 César de León, age 87 of San Antonio, was taken by the Holy Spirit to his Home on Sunday, September 18, 2022, with his wife and daughter, Leticia, beside him. He was born October 31, 1934 in Brownsville, Texas to Timoteo and Manuela (Saldaña) de León. He was raised in the home of his grandparents, Pablo and Julia (Figueroa) Saldaña. César is survived by his wife, Kathleen Beathard de León; his children, Leticia de León Bradley and her husband, Doug, César de León and Patricia de León; stepchildren, Robert Alexander and his wife Dianne and Stephen Alexander; his grandchildren, Alexis de León, Connor Bradley, Sophie Bradley and Chloe Bradley; step-grandchildren, Ryan Alexander, Patrick Alexander, Mason Alexander, Brooke Alexander and Aydin Alexander; his brother, Eusebio Franco, Jr. and his wife, Mary.

César was awarded a Bachelor of Science degree from the University of Texas in 1958 and was awarded a Master of Science degree from Texas A & M University in 1962. He served in the U.S. Army during the Korean Conflict. César was the Chief Engineer at the Western Company and served as Director of the Office of Pipeline Safety in the U.S. Department of Transportation in Washington, D.C. After retirement he traveled throughout Europe, Africa, and Central and South America.

SERVICES
Visitation will begin at 6:00 pm followed by the Vigil Service at 7:00 pm on Thursday, October 6, 2022 at Mission Park Medical Center, 8332 Fredericksburg Road. The Funeral Mass will begin at 11:30 am on Friday, October 7, 2022 at St. Francis of Assisi Catholic Church, 4201 De Zavala Road. Interment with Military Honors will follow at Fort Sam Houston National Cemetery, 1520 Harry Wurzbach Road. In lieu of flowers, his family requests contributions in his memory are made to Sembradores of San Antonio, P.O. Box 100674, San Antonio, Texas 78201.