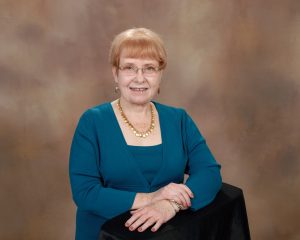 Sherry served her country as a soldier and as a career Army nurse. Her dedication and skill as a nurse and hospital administrator were unmatched. She loved and cared for the soldiers entrusted to her care and ensured they received the very best treatment possible. She was professional and caring with her patients but was tough as nails with anyone who did not have the best interests of the sick and wounded soldiers in mind. Sherry was a “take charge” Army nurse and was admired and respected by all. She retired as an Army Lieutenant Colonel in 1989.

Sherry was married to Chief Warrant Officer Michael D. McGwin for many years. She was the mother of Kate McGwin and the proud grandma of four children and five grandchildren.

In her later years, Sherry dedicated herself to her family and her Catholic faith. As an active member of the parish of St. Francis of Assisi for 15 years, she ministered to the sick and dying. Her many visits to patients brought medical knowledge and spiritual assistance and, no doubt, a boost in their morale.

Sherry was a daily Mass attendant. She was an altar server and often grabbed the hands of a child and asked them to accompany her in carrying the cross or candle. This action delighted both children and parents. Sherry also was an elementary catechist for some years and was active in ACTS retreats.

In the book Ireland, A Terrible Beauty, authors Jill and Leon Uris depict a quintessentially Irish man holding a hoe and looking directly at the camera. He said, “Have yourself a good look now, for when I’m gone you’ll never see the likes of a man like me again.” Remembering Sharon Marie Gahan McGwin brings the same sentiment. You won’t see the likes of her again until you open your eyes in Heaven. Rest in peace good soldier, good woman.

Sherry will be remembered at the daily Mass on August 31, 2022. A reception will follow in Henke Hall.